Chimamanda will be in Lagos promoting her latest novel, Americanah, so stop by if you can. The e-flyer below shows dates and locations. Americanah is published in Nigeria by Farafina. 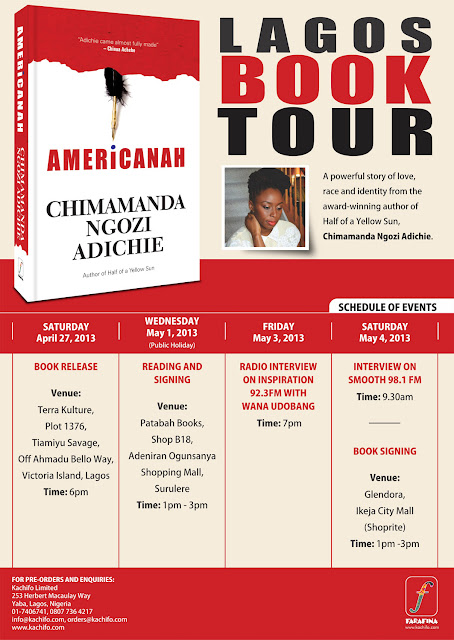 Email ThisBlogThis!Share to TwitterShare to FacebookShare to Pinterest
Labels: events


He went up the stone walkway to number five and rang the bell. Standing on the doorstep, he raised the collar of his jacket with his free hand and shifted his weight from one foot to the other. A cold wind was blowing and he wished someone would come quickly to the door. When the door swung half open, there was nobody there. He looked down, and smiled.

She blinked up at him, a stuffed sheep under her right armpit, the little finger of her left hand tucked between pink lips. He wrinkled his nose and looked at the clipboard in his hand.

“That’s my mommy.” Her finger muffled her words.

She stood there still, her head cocked, examining his face. And in spite of the cold and the dark gathering clouds, in spite of the packages he still had to deliver all around the city, in spite of this house and how it was, painfully, nothing like his, he reached into his pocket and took out a coin. He smiled. He tossed it into the air, watching the girl’s head bob up and down with each throw, waved it around in front of her eyes until… wait, where did it go?

The girl was biting the finger now, twisting one big toe into the wooden floor of the hall.

When he presented his hand before her eyes again the coin was there. “And voilà!”

“Ah!” Her eyes went wide, her little finger hanging onto her lower teeth. He chuckled.

“Verity… Verity. How many times do I have to tell you, you’re not to answer the door.” The voice, with the hurried footsteps of its owner, was coming from down the hall. A young woman appeared at the door wearing an apron, a dishtowel in one hand.

“Hi.” She glanced from his face to the girl’s.

“That’s me,” she said. Her pink face wore a layer of sweat, and he could smell the kitchen on her. He gave her the clipboard, with a pen, to sign. When she returned it, he handed her the dozen red roses and the box of Godiva chocolates. Her smile was genuine, albeit unsurprised, when she took them. She read the note attached to the flowers.

“It’s from daddy.” She said to the girl. She looked back at him. “Thank you.”

He turned and walked back to the road, feeling the weight of each step. It was starting to rain. When he opened the door of his car, he turned to glance at the house again and their eyes met. She was standing at the window, the finger still in her open mouth, the sheep now in the crook of her elbow. Her free palm was open, splayed against the window. With the index finger of her other hand, she had raised the hem of her shirt – absently, it seemed to him. He sighed. There had been many days like this, when his daughter would push her face into the living room windows, her tongue out, and contort it into funny shapes as she watched him leave for work. And he would wave and she would wave. And he would wave back. But that was a long time ago, before she’d grown up and out of his life.

He turned fully to look at her. Then he took off his cap, and with a flourish, he made a bow. When he looked up again she was laughing, her finger out of her mouth, and clapping her little hands with delight, careful not to let go of her sheep. He got into his car and dabbed at the corners of his eyes. But his smile stayed on the whole day.