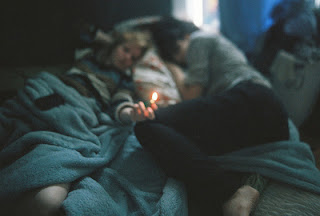 “How come you always carry a lighter? You don’t smoke.”

Diane had considered Kelly's question. It was one she got asked a lot, but she’d always shrugged it off. That day at the park, though, with Kelly, she felt compelled to answer.

“I got my first lighter from my dad. Stole it. I had to carry it in secret cos my parents would have never let me keep it; I was eight. I don’t know why I did it at the time, but thinking about it now, I've always liked how fire can mean different things; do different things. I like how it can sustain and destroy. For me, it’s kind of like a totem.” Diane’s laughter came out as a snort. “Wonder what that says about me.”

Kelly had leaned forward on the grass and kissed her, on the lips, for the first time. Diane stopped wondering.

The months had passed, and with each new day together, Diane knew she was falling deeper. Who needed sunshine when they had the smile of Kelly? But Diane knew that each moment brought them closer to the time when Kelly would leave. Because they always did. And no matter what Diane did – feign a terminal illness, send nasty messages, threaten suicide – they always stayed gone. And after an eternity, Diane would be able to stop the tears and try again. But Kelly was The One, and there would be no trying again. You never move on from The One.

Lying in bed that evening, Kelly asleep beside her, Diane reached for her lighter. First the click, then the satisfying whoosh of the flame as it came alive. Diane lowered the hand with the lighter, rested it on Kelly’s knee. She imagined the flame catching on Kelly’s clothes, on the sheets, on both their clothes, their skin, purifying them, keeping them in this moment together. Then maybe when they were all ash, they would rise up again as one phoenix. That would be beautiful because, then, there would be no leaving.

Diane wondered what the technicalities of this transformation would be. Would they have their memories? Would she, as a phoenix, be able to keep this moment, with Kelly’s face fixed in that half-smile she wore when she slept, alive? Or would it all be lost to the fire? Diane didn’t know, but it was a gamble she was not willing to take.

She let the flame die. She would rather have today.