I’d known for a while that I wanted to see Saro, so I bought my ticket early this week on DealDey. (Shout out to DealDey, by the way, for helping cheapskates bargain hunters like me live our dreams.) Since the show started on Tuesday I’d been reading everywhere online about how great it was, and so by yesterday evening my expectations were high. My only worry was that I might be disappointed after all the hype.

The 6pm show stared at about 6.45 and ended at 9. And I enjoyed every minute of it. Saro was like one big festival of music and dance. 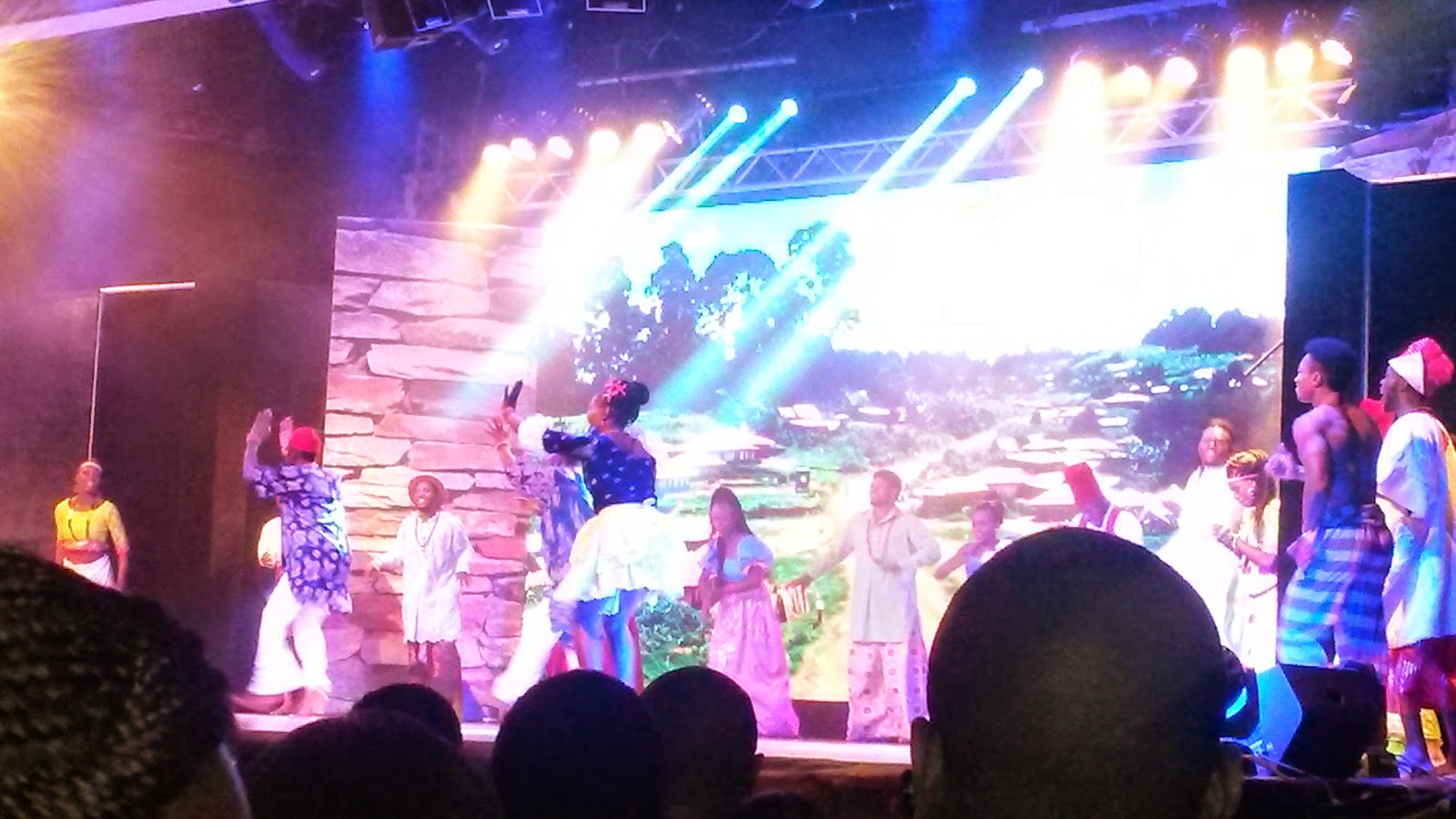 The actors
For me, it was really good to see Gideon Okeke outside of his brooding Tinsel role. I’ve never seen him in anything besides Tinsel. He did not disappoint. Bimbo Manuel was brilliant as Don Ceeto. I was also pleased to see Patrick Diabuah as Olaitan. I first saw him in Yoruba Romance many weeks ago, and then again in Band Aid, where I first heard him sing. He’s become a favourite for me. The women who played Ronke and Jane were pretty amazing.

The music and dance
This is where the play really shines; it is a musical after all. Every single musical performance had me wide-eyed, and some got me squealing like a child. From Rume and Olaitan’s 'Ma Gbagbe Mi' to the church choir’s rendition, everything was superb. The dancers were out of this world – their energy was infectious, and the acrobatics had me on the edge of my seat.

The story
Saro tells the story of a city, Lagos, and of four young aspiring musicians from the village who are desperate to ‘blow’ and make it big. They experience their first taste of the city when, as soon as they arrive, they are extorted by thugs for the silliest of things. A fight breaks out and the boys are arrested. But things start to look up when they are bailed by Don Ceeto, who hears them sing.

My highlights
There were no dull moments for me, but I found these bits particularly delightful and/or moving: 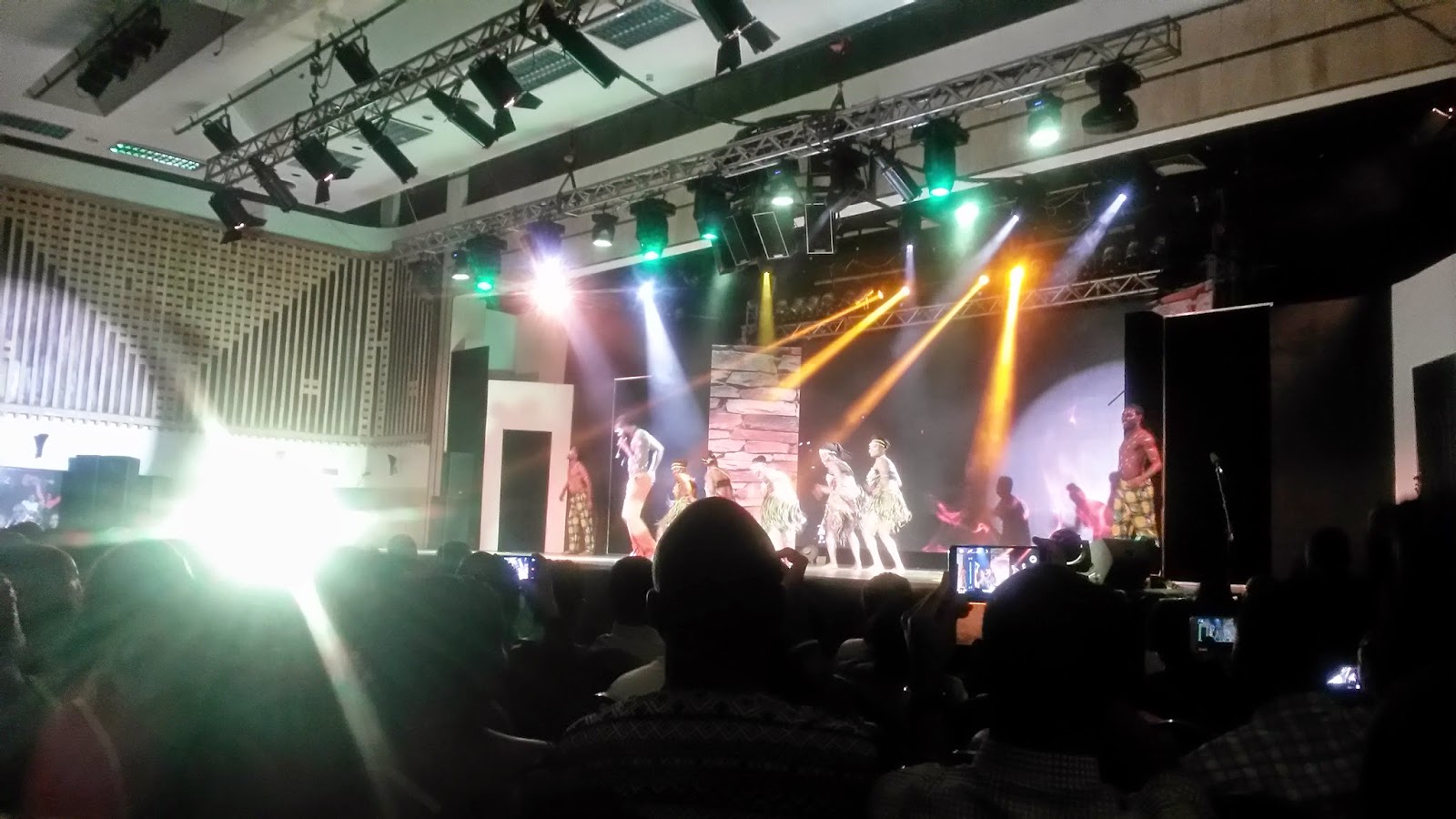 The scene where the boys first arrive Lagos

Azeez and Efe's fuji performances for Don Ceeto and the producer

The Lagos nightclub scene where the boys do a dance-off

The strength of this production is in the music and dance, in its vibrancy and the raw energy that the cast brings to the show. Stripped down to just the story, it’s pretty basic: the migration of the young and ambitious from rural dwellings to find 'greener pastures' in urban jungles. Plus two friends pointed out a small matter that had been left sort of hanging – Rume. But this did not in any way affect my enjoyment of the show, and my friends say the same of their experience. It’s why I rushed home to put up this post. I’m still on a Saro high.

Saro is on for one more day at the Muson Centre, with the final three shows today, 28 December (1pm, 4pm and 7pm). 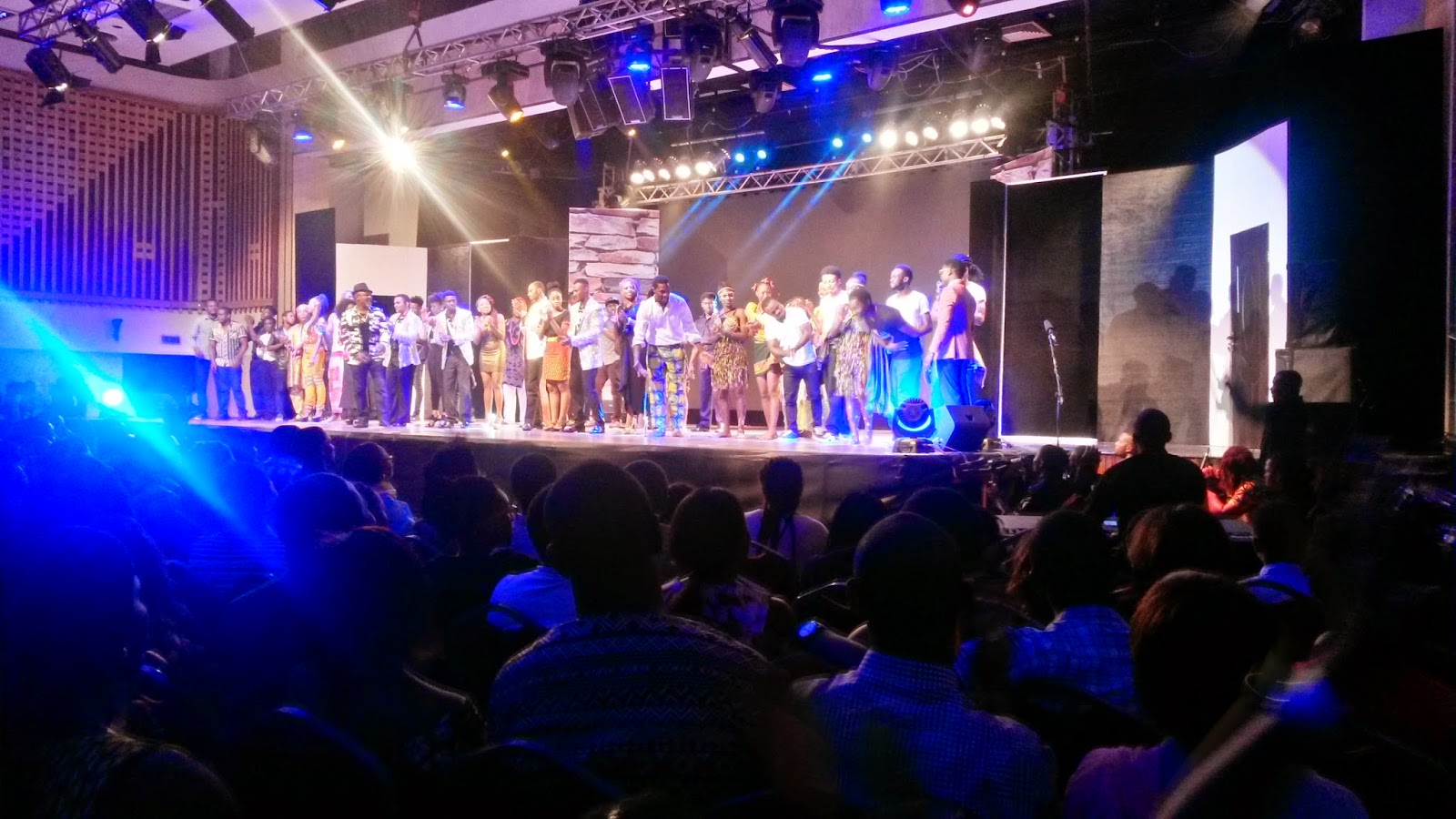 Posted by Uche Okonkwo at 12:13 AM No comments:

I am a good mother.

To my only son – and sometimes to my husband – I am feeder-slash-nutritionist, laundry(wo)man, nurse, counsellor, publicist, stylist, storyteller and encyclopaedia. I am also teacher, and it is this role that I take most seriously.

I delight in thinking up ways to teach my dear son the things that he needs to know, all of which can be summed up in three little words – mummy knows best. But just like his father, my son is a stubborn little ass, bless his heart. And so he challenges me, makes me go the extra mile, above and beyond, think outside the box, and so on. Good enough is never good enough for this my boy. It is because of how he makes me better in my bid to make him better, this is why I love him so much. I am the iron that sharpens his iron that sharpens my iron that sharpens…

My son was born with a mind of his own, the kind that prefers to learn from personal experience. And so as a good mother I have tried to pack as much experience as possible into his six years on earth. This is not an easy thing. Some children will take your word for it, but not my son. You will need to get creative. But I have learned to speak my son’s language. I am a quick learner. I was always first in my class as a child, even though my boy does not believe this because when he asked for proof I could show him none. (Now you see what I’m dealing with?)

The day my son finally learned the reason seat belts were important was a great milestone for us and the day I started to understand his language. For so long he would get into the back of my car for the drive to school every morning, and even though I strapped him in myself he would wait until we got on the road and then unstrap himself, the delightful little devil. Then he would stand in the space between the driver’s and passenger seat and bounce to the beat of whatever song was playing on the radio. I screamed, begged, bribed, and once I even stopped right in traffic to strap him back in after landing a heavy conk in the middle of his head. But again, two minutes later, he had freed himself.

I still don’t know if it was deliberate, the thing I did on this day of my epiphany. I was approaching a roundabout and I knew I had to use my brakes soon. I had time to brake slowly, ease into the change in speed. But my son was screaming Doro Doro Bucci along with the radio and bouncing up and down beside me and it just made my legs press on the brakes harder than they should have. My car screeched a little and my son, in slow motion, or so it appeared to me, flew forward and hit his head on the dashboard so hard that the CD stopped playing. I drove my car out of traffic and found a spot to stop, hazard lights blinking. I held my son and rubbed his head while he cried. But even as his tears wet my skirt the thought came unbidden into my head: this is good. He’ll wear his seat belt next time.

The next time he got in my car he strapped himself in before I could do it. Now he won’t sit in a car without a belt, and if anyone gets into my car and doesn’t use a belt my son will go ‘seat belt, Mummy! Seat belt!’ He’s so cute… my little soldier.

The day of the seat belt helped me unlock the door to teaching my son all the lessons he had refused to learn up until that point. A wheeled toy, carefully placed in his path so he slipped on it and fell, taught him to put his toys away when I said so. His homework book, seen by me on the dining table one morning before school, and promptly ignored, taught him to always put his books in his school bag after homework, like I always said. A splash of hot oil – and this one I can’t take credit for – on his face taught him at last to stand back when I fried fish, something my words had never been able to do.

But it is not only unpleasant lessons that I teach. I know the power of ‘positive reinforcement’. So when my son does good things like greet a visitor instead of just glaring at them, when he empties his leftovers into the trash, when he eats his vegetables without tears, he gets little rewards – a chocolate bar, an hour extra of video game time, a thousand naira added to his savings.

The positive reinforcements are good, but they bore me. They are not a challenge. The only good thing about them are the hugs they make my son give me. He’ll wrap his small arms around my thighs, his chin barely reaching my hips, look up at me with his father’s smile and say ‘thank you, Mummy. I love you, Mummy.’ I like that I did not have to teach my son to say I love you. It means I am a good mother.

There’s a new challenge now. My son has developed a fascination with the pool in our small housing estate. It’s like he's just noticed the shimmering blue water of it, and he keeps slipping out of the house to go stare at it through the bars of the fence around the pool area. It should make me feel better, this fence; but it is a low fence and it’s only a matter of time before my son tries to scale it. I have not asked my boy to stay away from the pool because my words will have no effect. I don’t know how yet, but my son will learn a healthy fear of that pool.

I am a good teacher. I think outside the box.