Ibadan was the destination for our fourth road trip. We started out at about 9am and reached Agodi Gardens, our first stop, early in the afternoon.

The entry fee at Agodi Gardens is N500 per person. There was a small situation at the gate because one of the guards was insisting we couldn’t take our cameras in. It was puzzling; what was the idea behind a place like Agodi Gardens if you couldn’t take a camera in? And if they weren’t allowing cameras, were they going to stop people from taking their camera phones in too? The guard said yes, camera phones were allowed in, but not cameras; or not certain kinds of cameras. We were able to call the manager’s attention and he explained things better. We could take pictures as long as they were not for a photo shoot or commercial purposes, otherwise we would have to pay a separate fee. We assured the manager that we were just casual visitors and our photos were for personal use, and we were allowed to go in with our cameras.

Agodi Gardens felt like some kind of outdoor events centre (there was a Full Gospel Businessmen’s Fellowship meeting going on when we got there) that had other stuff. There’s a wide expanse of land, a lot of which is covered in lush grass, and meandering walkways.

When you step in from the gate, there are toilets (which I found remarkably clean) to your right and a restaurant with outdoor seating to your left. There’s a tiny lake with inflatable rafts, and you can take a ‘ride’ in one of them for N100. This lake is so small, a ride did not seem worth it. There is also a pool and a small water park area, and a small zoo that had, apart from different kinds of monkeys, two lions. I couldn’t see much of them because they stayed in their dim, cavernous cage the whole time we were there.

From Agodi Gardens we headed to the University of Ibadan to see the zoo. I think the N500 entry fee was entirely worth it; so far, it’s the best-kept zoo I’ve seen in Nigeria. The cages and enclosures were reasonably spacious and looked clean, and it was clear that some actual thought had gone into the planning and structure. And there were so many animals: at least three lions, a pretty giraffe called Ajoke, several apes and reptiles, an impressive range of birds, hyenas and jackals, horses, and many animals I’d never seen before.

We left the zoo for the IITA guest house where we were to spend the night. The IITA compound is beautiful and serene. In some ways it reminds me of the Ikogosi Warm Springs Resort. Many of the roads and walkways are lined with these lovely trees that kept shedding their pink flowers which fell like snowflakes, carpeting the ground in pink. It was such a pretty sight. 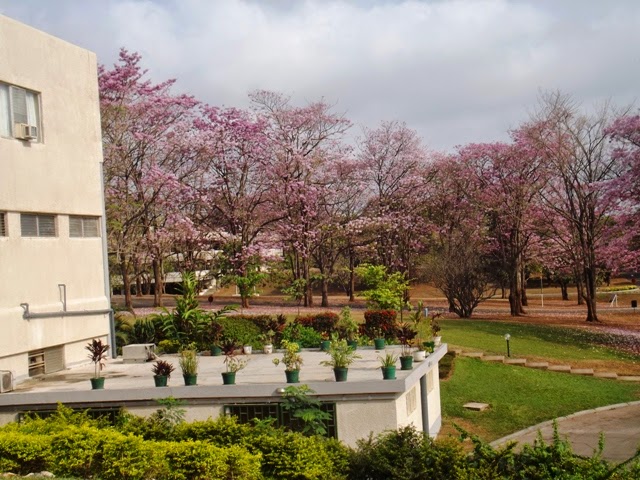 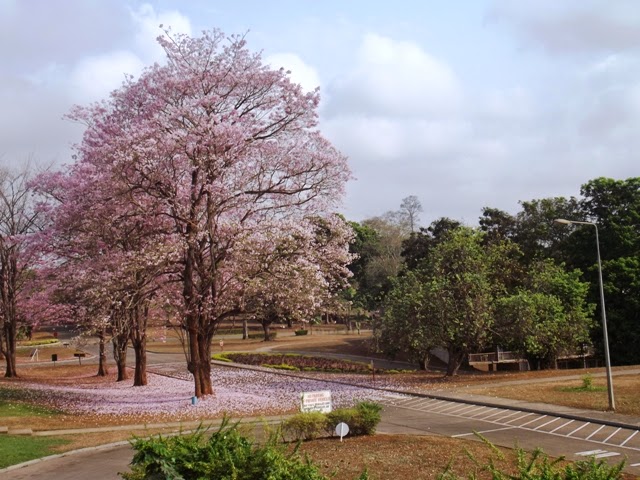 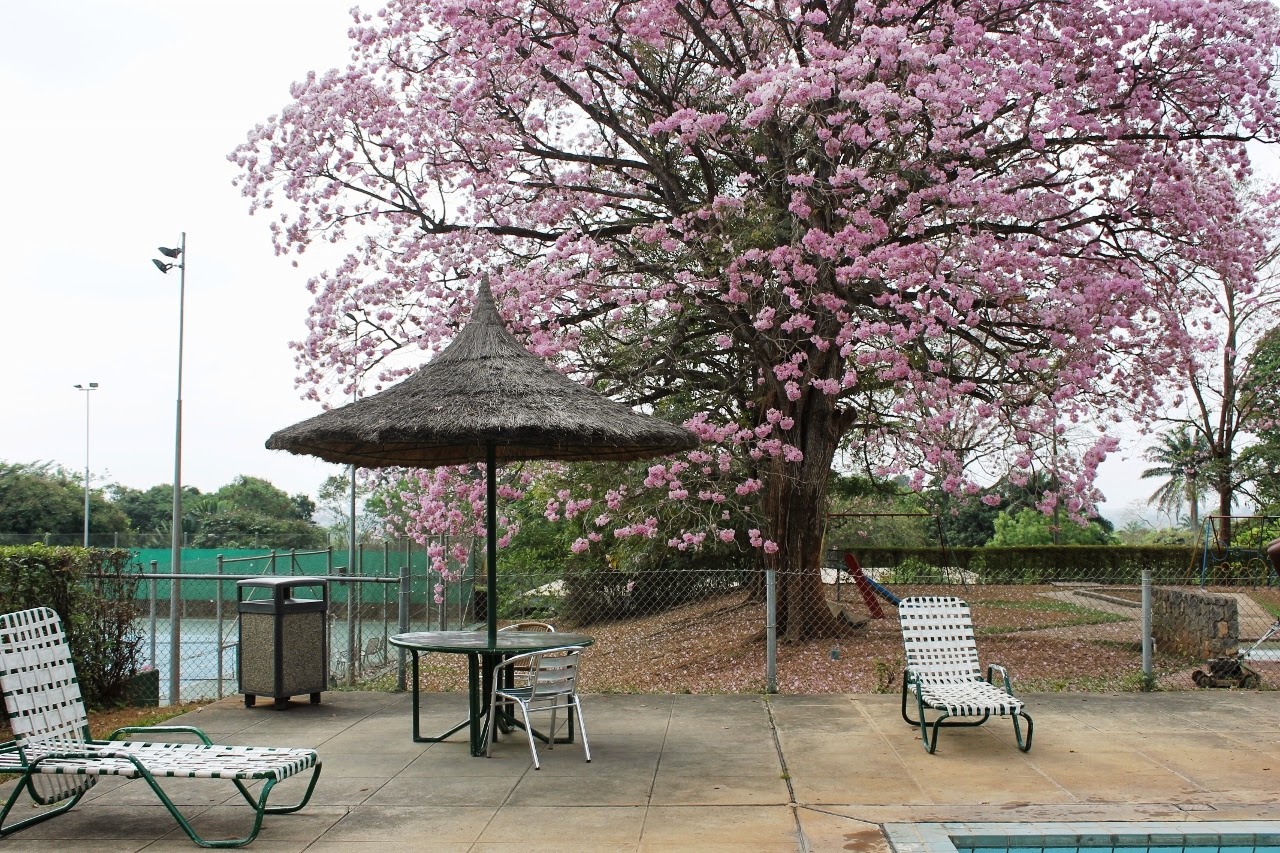 IITA is quite a pleasant place, but the service from the staff could have been a lot better. One of the reasons we had chosen to stay at IITA in spite of their long list of rules and prohibitions (and there really is a long list) and their insistence on rooms being paid for in full to make a reservation, was their Nature Walk. Only at the point of check in were we told that we would not be able to go on the Nature Walk because the guides did not work on weekends. Also, speaking of checking in, they have a rule at IITA that requires guests to check in certain electronics at the gate – laptops, cameras, tablets – a long process when you have a bus with thirteen people.

Our rooms were quite spacious, with twin beds and a wall of glass louvers that I found delightfully retro. The compound has a tennis court, a squash court and a swimming pool.

I was quite displeased at the treatment we got at IITA; we all were. It did not help when on Sunday morning a different receptionist informed us that her colleague who had checked us in the day before had been mistaken; some guests had booked a Nature Walk for that very morning, and she could see about arranging one for us. We decided to forego the walk when she said it would cost an additional N2,500 per person. We would make do with seeing the lake, which was free, on our way out. 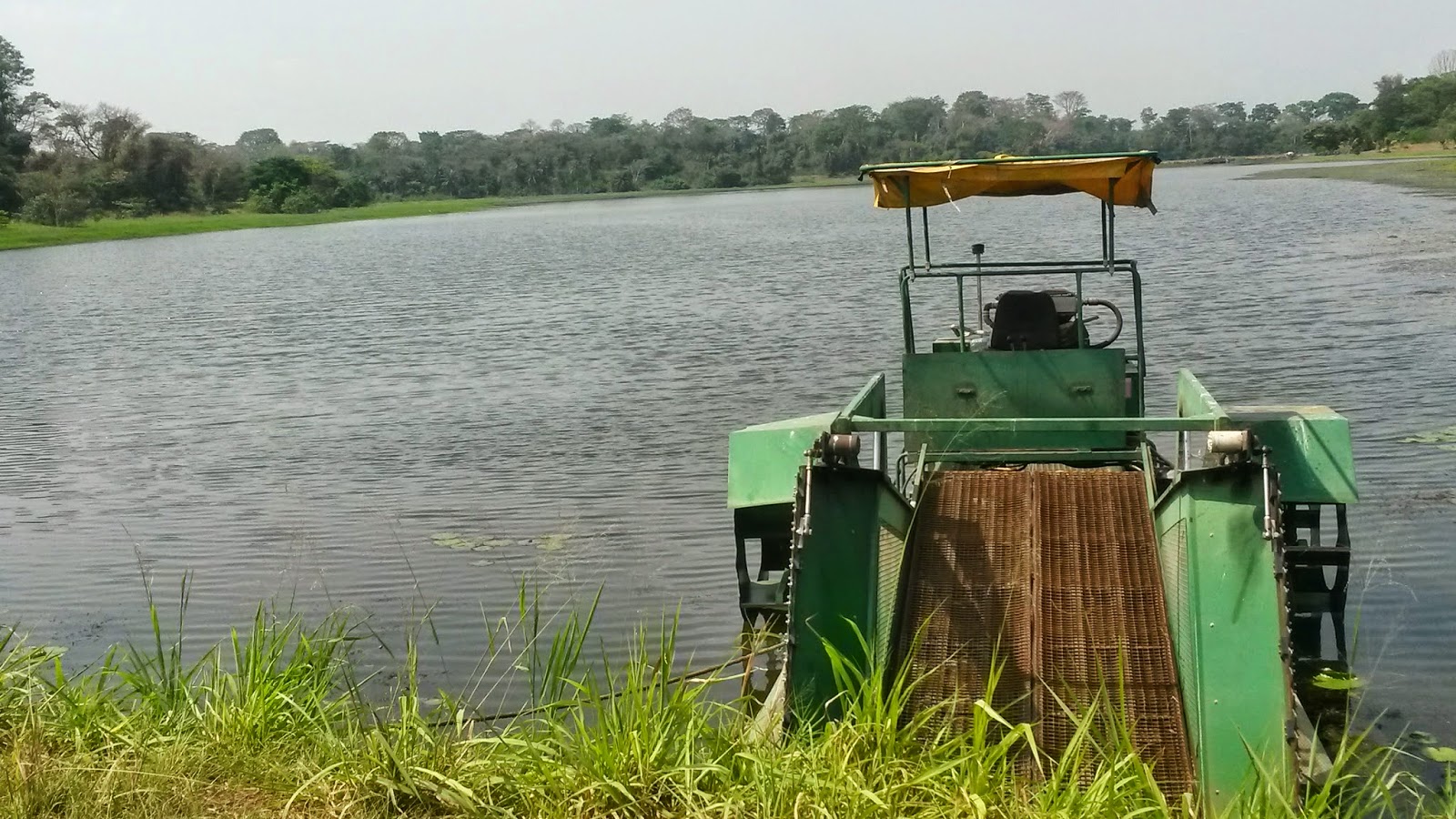 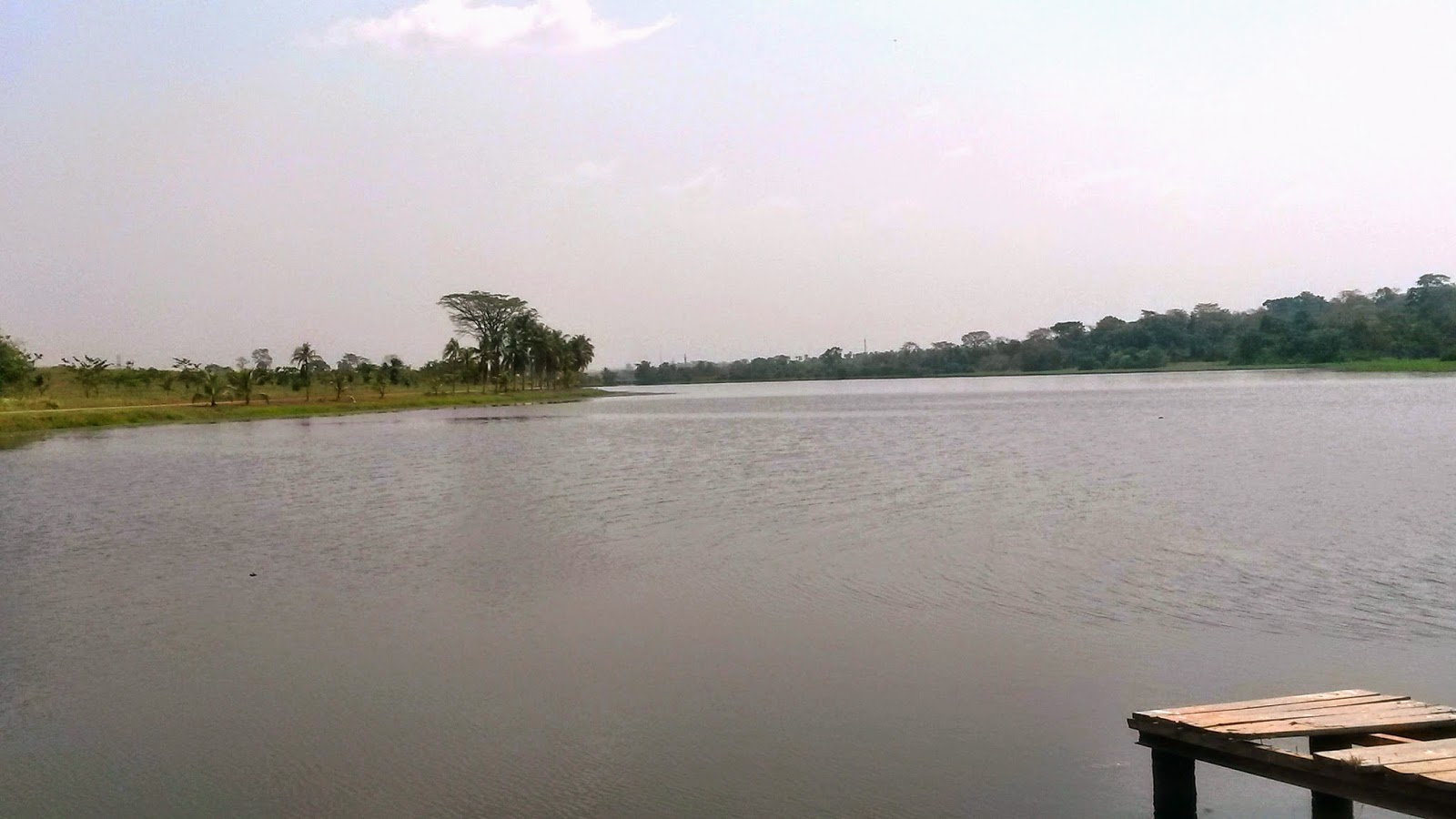 This done, our trip came to an end and we made our way back to Lagos.

How to Make Friends (Smile)

I am reading a book that will teach me how to make friends.

1. Be genuinely interested in people.
2. Do not complain; compliment!
3. Smile, even when you do not feel like it.

I am smiling now as I get off the danfo stuck in traffic and walk the rest of the way down the bridge to Obalende. And why not? It is a good day; the sun is shining bright, but not too bright. The sky is blue, but not that too-good-to-be-true blue I hate. There’s a breeze. It is a good day for a smile. It does not matter that I do not feel like smiling. The book says my feelings will follow my actions. I am practising training my feelings to follow my actions. It is still too early to tell if it is working.

I approach a beggar and my smile vanishes. The world is a sad place, is it not? The lines on his weather-beaten face are proof; he has nothing to smile about. What does it say again, my book. The ones in most need of a smile are those who have none to give… something like that. As I pass the beggar, I make a decision. Silver and gold have I none. I look in his eyes, and I smile.

He does not smile back.

I take mental notes during conversations now, and as soon as I can I transfer them into my special notebook so that next time we meet I will remember to ask Obus about the dog he is training to ride a bike, Bambo about his ailing father, Beatrice about the creep next door who will not leave her alone, Chinwe about her delightful mother-in-law.

I swallow my complaints about Emem’s excessive use of perfume and notice that the pink scarf around her neck gives her a chic look that really works for her. I say this, and she smiles and launches into her philosophy on scarves as accessories that express her mood. Every colour says something, or so she tells me. I tell Joseph at the gate that he is the smartest looking gateman I have ever known, and every day since he greets me with a salute a general would be envious of.

I have been called snub, stuck-up, Groucho Grouchinus, unfriendly, mean, silent killer, slow poison. Boring… So it is strange now, having people stop by at my desk to chat, having them linger when I smile and ask about their lives.

People actually want to be with me. They ask me to lunch, invite me to mini-parties, reschedule when I can’t make it. They’re confiding in me, going out of their way to help me. The other day when I was running late, Yusuf lied for me without my having to ask. I could have charmed the boss into letting it go (did I mention the boss loves me now?), but it was touching how Yusuf just stepped up like that.

Sister Nkoyo from church, Bose from the building next door, Ala from three cubicles away. I will go out with all three because I like all three. Then I will choose one. My newfound powers will not be used for evil. But it is an enticing thought, going for three. I’ve never been lucky with females. Maybe I can call it making up for lost time?

On the way home today there is no traffic coming down into Obalende. This pleases me. But the driver decides when he reaches the exit for Obalende that he wants to continue on the bridge. He orders “all passenger” out of the bus as the conductor slides the door open. I am practising happiness from within, happiness regardless of circumstances, so I decide that this will not bother me. I step out of the danfo and continue toward Obalende on merry feet.

I see the beggar from a distance, the same beggar from my first Smile Day. I see him every day, and I am prepping my smile for him even as I walk, like I have done since that first day. He always returns my smile with a frown; the last three days or so he started adding a growl. His life must be so sad. But he can change that easily, turn that sadness into joy. Life is all about perspective; if only he knew. This ignorance, this is the thing that is most tragic. Maybe I will talk to him one day. Does he speak English?

I walk toward him. Silver and gold have I none still. I smile, my offering to him.

I am still smiling when he jerks up from his perch on the ground as I pass and shoves me onto the path of an oncoming LAGBUS.

I will die, but at least they can truly say I died happy. This is something to smile about.