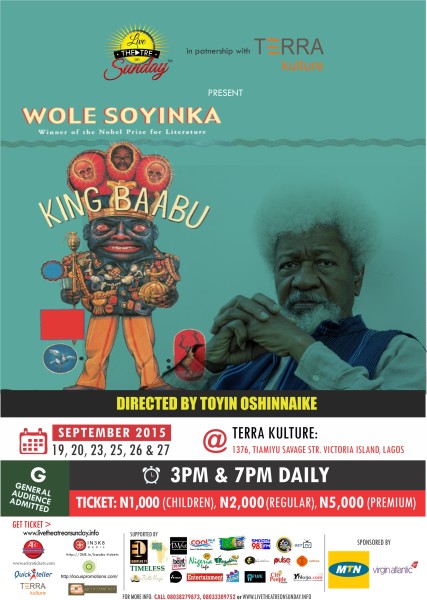 Wole Soyinka’s King Baabu is a comedy satire that parodies many African nations, including our beloved Nigeria. As coup follows coup in the nation of Guatu and the citizens cry out for democracy, the military rulers in Guatu struggle to reinvent themselves. General Basha, shortly after playing a central role in  General Potipo’s ascension to power via military coup, is pushed and prodded by his wife, a veritable Lady Macbeth, to acknowledge his ambitions and take over government. With help from his wife, her  brother, Tikim, and the labour, religious and traditional rulers of the day, General Basha is able to oust Potipo, who manages to escape with his life, and declare himself monarch of Guatu. He takes on the guise of outwardly benign ruler, paying lip service to democracy and open government even as his actions remain decidedly undemocratic.

All is well for Basha – now King Baabu – for a while. But soon enough, discontent and insurgency arise, led by General Potipo, and King Baabu is on the run.

Featuring a stellar cast that includes Seun Kentebe, Toju Ejoh, Abiodun Kassim, Tessy Brown and several others, King Baabu will have you falling off your seat with laughter. My favourite memories of the play are of King Baabu (played by Toju) dancing in his kingly robes and crown. But besides its fun and humour, King Baabu will get you thinking, about Nigeria and the many countries like us – each in our own way a picture of Soyinka’s Guatu – where former military rulers outwardly reinvent themselves. I think it is significant that for a huge portion of the play Basha/Baabu wears his military uniform underneath his robes – this monarchy/democracy is a sham that makes us question the verity of Nigeria’s democracy. The ease with which the labour, religious and traditional leaders are bought over to whatever side holds power is, though humorously portrayed, disturbing. The play’s ending – spoiler ahead!  – is the ultimate question. The supposed savior of the kingdom is General Potipo, the same one who had, in the first act, taken power through a military coup. Is he just another player in the same vicious cycle, a placeholder until the next coup?

King Baabu is an important play delivered with humour and wit. Delightful yet thought-provoking, it is one I am glad to recommend.

Theatre Events This Month (And Beyond)

It’s a good month to overdose on theatre. This September Terra Kulture will be showing two (yes, two!) plays on various days: Wole Soyinka's King Baabu and Greg Mbajiorgu's The Prime Minister’s Son. (Get discounted tickets for both plays from DealDey, before the offers expire.) 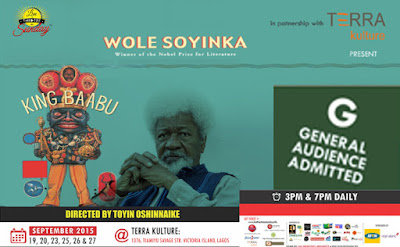 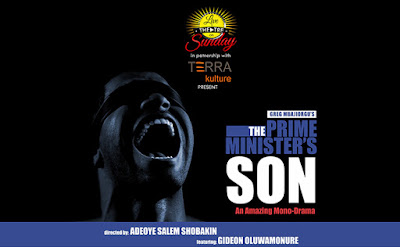 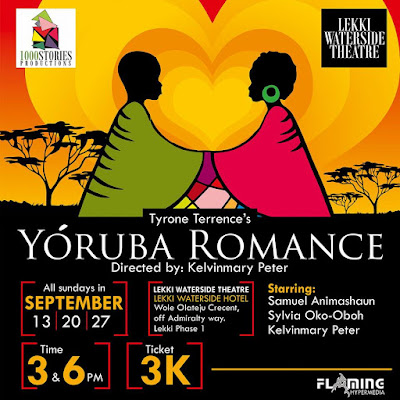 And as if that isn’t enough, early in October there will be Bobo Omotayo's London Life, Lagos Living (get tickets here) and Okonkwo's Inquest, a play based on Achebe's Things Fall Apart (tickets here). 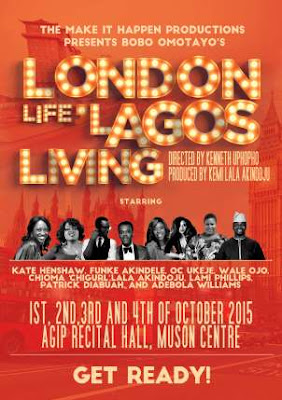 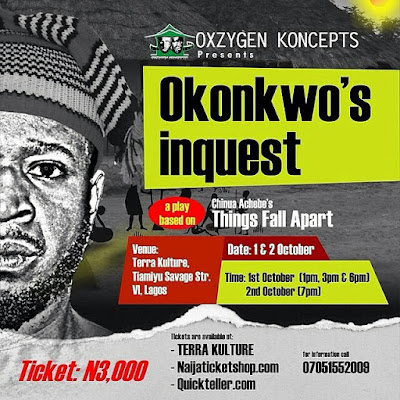 There will be reviews. Watch this space.

I was talking with a 9-year-old the other day about the most riveting of topics – school. In about a year she'll be ready for secondary and she seemed pretty pleased about this, having recently been promoted from primary 4 to 6. She said she would be going to a boarding school. I asked if she liked this and she said, in this odd, adult-sounding way that kids sometimes have, ‘I don’t like it but my mummy said I’m going.’

I went to a boarding school. Did I enjoy it? Well, for the first three years I cried each time I had to go back after a holiday. I remember my mum asking once if I was being abused. So no, I didn’t enjoy boarding school, but I learnt how to do boarding school. In many ways I’m glad for the experience. It has inspired many of the things I write.

A couple of years ago I said to a friend that all my children would attend boarding secondary schools. What he said next was utterly simple, yet it was something I’d for some reason never thought about: ‘why would you want to do that,’ he asked, ‘when you yourself didn’t like boarding school?’ After a moment of stunned silence I finally admitted, somewhat shamefaced, that I’d never looked at it that way. I come from a family of boarding schoolers; it’s my normal. It’s like taking the same route home every day; you never really think about it until you have to. Years before, I’d had a similar conversation with a different friend, saying that boarding schools made children independent. He’d said not necessarily. He didn’t like the idea of boarding schools, said he wouldn’t want his kids living away from home at that age. We agreed to disagree; what did he know about boarding schools, he hadn’t attended one. Me, I knew about boarding schools. I’d attended the same one the whole of my six years in secondary school, and so had all my sisters. We turned out great!

Anyway, all of this got me thinking about the decisions we tend to make with our minds set to Default: big decisions like the careers we get into, the people we marry and when, having children and how we raise them. Sometimes a simple conversation is all it’ll take to cause a shift. Other times we’ll spend years of our lives trying to do the opposite of our normal when we realize that wait, I actually do not have to do life this way.

Having and raising children is one life-altering decision that too many people make by default. For a lot of people it’s not even an active decision: it’s just what people do *shrug*. Having a child means being responsible for a life. Why the enormity of this undertaking doesn’t seem to astound more people is a mystery to me. I know that the thought of raising a child makes me lightheaded with anxiety about the various and spectacular ways I could mess up and scar my offspring for life, the many ways I could fall short as a parent. Maybe the answer is a simple one, that these other people just have more courage than I do. Or more faith? More love?

These days when I think about having or raising children, there are no automatic answers anymore. And I say ‘if’, not ‘when’. Because I asked myself if I really truly wanted to have children, and the answer was not Default-yes.