I’m on my way to work one morning, reading on my phone as the danfo rattles along. The bus pulls over to pick up an elderly woman in Ankara. She takes a seat at the back of the bus. I’m on the same seat; there is a man between us. A few minutes after the bus rejoins traffic the woman clears her throat and begins.

— My brothers and sisters, shall we bow our heads as we pray.

I roll my eyes. I’m not a fan of preachers in public transportation; or of the people who take it upon themselves to play Danfo DeeJay, assaulting the busload of people with loud music from their phones; or of the ones who make endless phone calls, screaming out their business for the world to hear.

It’s the usual sermon – sin, hell fire, God don’t like ugly. The Preacher takes out a sheaf of tracts from her bag and passes them around. I tuck mine under my armpit and go back to reading, trying to drown out her words with those on my screen.

We’re pulling up to a bus stop just as The Preacher seems to be rounding up. At the bus stop a few passengers get off and others get on. As soon as we’re on our way again The Preacher resumes preaching, doing a recap of all she’s said before, for the benefit of the newcomers. She hands out tracts to them as she speaks.

Finally, The Preacher is done and she says a short prayer in closing. I am grateful for the restored quiet and I hunker down to enjoy my reading. But then The Preacher begins singing out loud, one chorus after the other, after the other: Take Glory Father, Baba Ese o Baba, Heavenly Race.

I put my phone in my bag and stare out the window.

We’re stuck in traffic at Falomo Roundabout when I notice The Preacher has stopped singing. I glance at her, and she’s looking at the young twenty-something female seated to her other side. There are three of us at the back of the bus now, the young man seated between me and The Preacher having gotten off at some point. The Preacher leans close to the girl beside her.

The girl gives her a questioning look.

— I want to talk to you about this your hair.

I look at the girl’s hair. It’s a long, flowing weave in brown; the inexpensive synthetic kind.

The girl looks somewhat pleased as she says this.

The Preacher’s sigh is ominous, heavy with unspoken meaning. When the girl does not prod, The Preacher looks at her again.

— Don’t be angry, but I have to tell you, it is not good. This is another person’s hair that you are carrying on your head. Who knows what they have used it for, before they start selling it to people.

The girl keeps a straight face and says nothing. I wonder if The Preacher would have given me the same sermon if I’d been wearing extensions or one of my infamous wigs today. My hair is cut low, unrelaxed, so apparently I pass.

— You should use your own hair that God gave you, you will look very fine, better than this sef. All sorts of spirits in this world… we need to be careful so we don’t go and carry trouble with our own hands.

The girl says this with no malice, and I admire her graciousness.

— You are welcome, my dear. God bless you.

The Preacher resumes singing as the bus inches along in the go-slow. Under the bridge at Falomo, the bus stops to pick up passengers. The Preacher stops singing, perks up. She reaches into her bag for more tracts, and she hands them to the two teenagers who have just entered.

— My daughters, take. Take and read and be blessed.

The girls take the tracts.

— Remember to be reading your Bibles. No boyfriend o; no sinning o.

The girls look slightly confused but they nod.

Posted by Uche Okonkwo at 12:07 PM No comments: 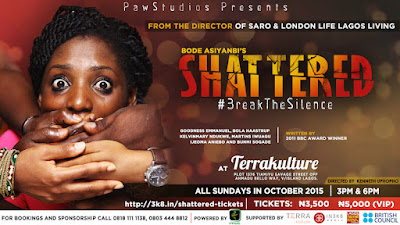 Produced by PAW Studio and directed by Kenneth Uphopho (director of Saro the Musical I and II, London Life Lagos Living), Shattered is an intense theatre experience; entertaining, yet incredibly moving.

Loveth is the teenage daughter of Folake, a struggling widow who seeks escape from her troubles in religion. The play opens with a weary Folake returning from work to an empty house – Loveth, who should have been home from school long before her mother, is nowhere to be found. Dishes are piled up in the kitchen sink and an angry Folake seethes with anger as she awaits her daughter’s return. When Loveth returns, the ensuing confrontation causes the teenager to attempt swallowing a handful of her mother’s pills. But Folake gets to her just in time. What follows is a parade of characters and their attempts at intervention: Nneka, Folake’s more affluent friend and, to some extent, voice of reason; Pastor, the Bible and crucifix-wielding, white garmented preacher who has Folake convinced that all her troubles can be traced to her late husband’s family; Mr. Dave, Nneka’s husband and Folake’s benefactor; and Nancy, Loveth’s friend and classmate.

The story that this play tells is not a new one. But what Shattered does well is dramatize the difficulty that the victim of sexual abuse faces in speaking about the experience. In this play, Loveth is surrounded by a community of people she cannot tell about what has happened to her; and for many victims of sexual abuse, this is their reality. Folake, though her intentions are good and her love genuine, is a woman hardened by life and blinded by religious fervour. She cannot reach her own child. The more level-headed Nneka is able to get Loveth to speak, but only so much. Pastor, himself a potential abuser (or so it would seem) cannot answer Loveth’s questions about life and God. It is to her friend, Nancy, that Loveth eventually tells her troubles.

It feels needless to talk about the set, but I have to say I liked it. I think the designer(s) worked very well with the space they had, making use of both stage and floor space to give us a bedroom, living room and a kitchenette. The audience seats were arranged in rows, in a semicircle; the overall feel was one of quiet intimacy.

At the end of the performance there was an interactive session with the cast where the audience was invited to ask question and comment on the play and on the subject of sexual violence/abuse. I think this is a brilliant move on the part of the cast and crew; a way to engage with the audience, to further the conversation, to consider the question ‘what next?’ While there are no simple answers, it’s important that we are able to ask these questions. Shattered is a play well worth seeing.

Shattered will be showing at TerraKulture on all Sundays in October, at 3pm and 6pm. Tickets cost N3,500 (regular) and N5,000 (VIP). You can get tickets here, on DealDey or at the door.

Posted by Uche Okonkwo at 8:47 PM No comments:

You’re in a danfo in Wednesday morning traffic. It’s one of those big but cramped twenty-two-seater buses, with a few people lapping. You’re reading on your phone, ignoring the argument between two passengers and the conductor about change. The driver parks beside the road and jumps out to look underneath the bus. You sigh. It's the second time he's done this since you got on the bus four stops away. As he disappears under the bus someone starts to shout fire fire.

Your head jerks up from your phone. People start to scream and there's a stampede for the door. It is a wide door but people take up too much space in a fearful scramble. You're seated on the third row out of four, across from the door but right by a window. The window! You turn to it, but even a small child wouldn’t fit through.

You remember the stories – of danfo engines catching fire and burning the slow passengers alive. (The survivors would have been the ones who ran first and asked questions later, the ones who didn't wait for the evidence of smoke.) You remember your own experiences – doors falling from their hinges as the buses sped by (once on friggin’ Third Mainland!); being driven through pouring rain with no windshield wipers. You join the rush.

You use your body like a ram and you push against the wall of flesh in front of you. You think about fire. It can come in one big explosion, or in a quiet whoosh, or silently, with only the smell of burning to announce it. However it comes, you want to be safely off the bus when it happens.

Your feet meet the ground and you've never been so grateful for roadside grass. You quickly put a safe distance between you and the bus. Only then do you turn to watch the inferno.

The driver shimmies out from under his bus, wiping his hands on his pants.

You exchange questioning looks with the other passengers. The fog is starting to clear. You look under the bus, stretch your neck to see behind it. No smoke, no fire. You let out a shaky laugh, and then you can’t stop. The others are giving you strange looks so you cover your mouth. They are grumbling, dusting themselves off, examining scrapes and bruises; everyone wants to know who called out fire.

A young woman in an orange shirt gives a shamefaced smile as she looks away.

The conductor herds you back onto the bus with the others. You find a place on the same row as before, but a man has taken your former seat by the window. You note his smug smile, the smile of one whose calm paid off in the face of panic. You want to smack the smile off his face.

From behind you:
—Na wah o. Which kain nonsense be dis?

—Oga, na you leave your slippers inside bus run comot?

—My sister, wetin I for do na? I leave slippers o.

Two bus stops later the woman who raised the alarm gets off. As the bus eases back onto the road, the man with the torn trousers hisses.

—No mind her. Since she enter bus na so so talk she dey talk.

—But why she go talk wetin she no see? She wan kill person?