Danfo Chronicles: When Passengers are Jerks

Not every time driver did this, conductor did that. Sometimes, passengers, behave yourselves.

One day, on a bus from Obalende, the conductor was collecting fares. At some point, he received a one hundred naira note from a young pregnant female. He asked where she was going and she said Lekki Phase One, and the conductor said her fare was short of fifty naira. She immediately began screaming, saying she had only one hundred naira and he could take it or leave it. The conductor pointed out that he had called out his prices clearly, and so she shouldn’t have entered if she didn’t want to pay. The girl, still screaming like a banshee, said, ‘Can’t you see I’m wearing earpiece?! I didn’t hear you!’

Passengers began piping in: and whose fault is that, they asked. One woman said that she’d noticed the pregnant girl almost get hit by a keke a few minutes ago while they were standing at the bus stop; the pregnant girl hadn’t heard the keke coming because her ears were blocked by the earpiece. An elderly man said with a solemn voice that he’d witnessed an earpiece kill a young man once.

The conductor asked the girl to come down from the bus, but she refused to.

‘I’m not going anywhere!’ she screamed. ‘If you want to beat me, come and try it!’

When the other passengers tried to talk to her she turned on them, and soon she started a fight with the man in the passenger seat in front.

‘I wish you were going to Ajah,’ the man kept saying. ‘You for reach Ajah, then you go know who I be.’

I wondered who exactly he be.

The driver suddenly decided he’d had enough. He stopped the bus to remove the pregnant girl bodily. But he stopped short when his eyes fell on her protruding stomach. He stood silent for a moment.

‘This one na devil temptation,’ he said finally. ‘Touch am now, she fit die.’

‘Na you be devil brother!’ the girl shot back. ‘And na you go die. Bastard!’

The driver got back into the bus and drove off. The pregnant girl carried on, cursing everyone who had spoken to her, and their grandmother.

I was on a bus from Yaba to Obalende. The ride was uneventful, hardly Danfo Chronicles Material. Until we got to Obalende. As the bus came down the bridge, with its door open, the driver and conductor spotted four uniformed policemen, complete with rifles, scanning the approaching buses with hungry eyes. They were looking for buses that would begin letting out passengers before they’d reached the bottom of the bridge and Obalende proper. Both driver and conductor knew what was up, and the conductor quickly shut the door. The policemen eyed our bus as it passed by.

A few metres ahead there was a slight build up of traffic and the bus slowed to a stop.

‘No open that door o,’ the driver barked at the conductor, who nodded.

We were in traffic for a only little while when the other passengers began to get impatient, urging the conductor to open the door. He refused; the policemen were watching. Next thing, we looked up and one of the men sitting in front had opened the passenger side door. He and the passenger next to him got off the bus and sauntered away, with the driver and conductor yelling insults at them as they disappeared amongst the bodies.

Before we knew it, the policemen had swooped in. They commanded all the passengers off the bus, even as the driver pleaded and we explained that it wasn’t the driver’s fault. But the policemen weren’t having it. They were settling into the bus and making themselves comfortable as I walked away.

I began to think about the idea of home after listening to writers at Ake Festival talk about what home meant to them. Is the idea of home tied to a physical place? Is home the people we love the most, or is home something abstract and intangible that we (can) carry with us wherever we go? Is it neither? Is it all?

Whenever I go away from home for a while (‘home’ here meaning the house where I live with my family), I’m often a little sad to return. As a child, the places I visited outside home often held more appeal – the friends’ houses where I visited and slept over were always a little better: better bathrooms, or better toys, or seemingly more liberal parents, or cable TV. The only times I imagine I was ecstatic to be going home was when the place where I’d been was horrible – like boarding school. Of course, each time I was home on holiday and someone annoyed me, I’d think, ugh I can’t wait to go back to school. Still, home always trumped school. By university this had mostly changed, maybe because of the independence that came with university life; maybe because after six years of having lived away from home for months I had become just as comfortable away. Maybe because I had a boyfriend who lived in Port Harcourt where I went to school.

So as I returned home after four nights in Abeokuta, I wondered again at this sadness linked with returning home. Am I sad at the idea of returning to ordinary, to normal? If so, does this mean I am dissatisfied with my normal? Am I sad at the change; and if so why am I never sad on my way out? Or am I sad because my ‘home’, the house where I live with my family, is not really home?

What, then, is home? Everyone has their own answer. I think the definition of home that ties it to a house, a place, is probably the most simplistic. It is an easy definition that sometimes ignores the core of homeness – belonging, the feeling of being in a ‘place’ that you know, that knows you. For some people, this place could be the place where they live, with (or without) their family. For others it is not. For others, home is the people that matter the most to them, which may or may not be family. For yet others, home is wherever they find themselves, and it is these people who I think carry their homes with them on the inside, and whatever space they occupy they populate with little invisible pieces of them that remind them of who they are, who they’ve been. I wonder if people like them ever feel lost. 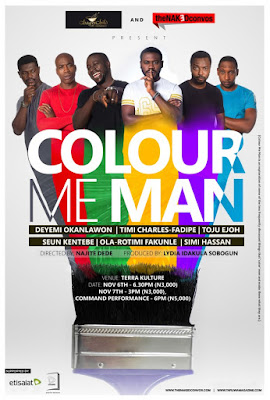 It was with some ambivalence that I decided to get a ticket to see Colour Me Man. But I ended up having a really good time at the show.

Produced by GbagyiChild Entertainment and The NakedConvos and directed by Najite Dede, Colour Me Man is 75 minutes of pure enjoyment, with an ending that you will not see coming. Colour Me Man is inspired by the play For Coloured Girls Who Have Considered Suicide When the Rainbow is Enuf, and is based on a series of monologues, by men, published on The Naked Convos.

The play opens with six friends – Black, Blue, Red, White, Grey and Yellow – meeting at Black’s bar. It’s a casual guys’ night out, and the men wind down and begin talking. Grey goes first, disclosing the secret of his extramarital affair – the model couple is not so model after all. After a good dose of ribbing, and some frank talk from White and Black, Grey is left rethinking his infatuation with his woman on the side. Next up is Yellow, who it turns out is insecure about his poor background, and is unable to be with a woman who is way beyond his league and who neither needs nor is impressed by him. White is the quintessential good guy; a virgin who has developed tunnel vision from so intently looking for Miss Perfect. He is Mr Perfect after all, and he deserves nothing less. His friends quickly put him in his place; his perfectionism, they tell him, can keep him from finding happiness.

Blue is the workaholic who has little time to spare for anything or anyone else. Accused of being a snob, Blue’s family money, his father’s unrealistic expectations, and the wariness that comes from being the rich guy everyone wants a piece of, have made Blue somewhat aloof. It is at this point that things start to get heated. Red provokes Black into revealing a secret plot against Blue, as well as his (Black’s) loss, the guilt and shame that have haunted him for so many years. Harsh words are traded and things get even tenser between the six – with Blue and Red coming head-to-head. In an impressive show of self-awareness, Red reveals his sadness, his dissatisfaction with his life, the fear of failure that dogs him, paralyses him even when he knows he should act. He admits that he has done a lot of wrong in his life. His friends try to reassure him of the grace and forgiveness that is available to everyone, but Red is not done yet. In a shockingly graphic fashion that leaves me frozen to my seat and his friends turning away in revulsion, Red reveals the extent of his depravity, and it is clear that there will be no grace or forgiveness for him here.

All the elements of this production come together nicely. The actors had me convinced from the first line. Timi Charles-Fadipe (Red) gives a particularly stunning performance; the last few minutes of the play are pure brilliance. I enjoyed seeing Toju Ejoh (Black) who is one of my favourites, as well as Seun Kentebe, who I like even more each time I watch perform. All six actors were wonderful to watch. I liked the intuitive lighting and the lovely set (although that red settee was a bit distracting; I was worried it might collapse). All in all, it was an evening very well spent.

Colour Me Man is showing for just one other day, tomorrow, at Terra Kulture. Should you go see it? It's a huge yes from me.