It’s about 40 kilometres from where I now live, in Lekki, to my old neighbourhood in Isolo/Okota. But not all distance can be measured in miles and kilometres; sometimes distance is measured in memories.

This Christmas, my mother and I drove to Okota to celebrate with this family of our friends. The Christmas party is an old tradition with this family, and as kids we would go in our best clothes, always excited, until the ennui of youth set in. It’s been over eight years since I last attended one of these parties.

In 2007 my family moved away from Isolo, from Papa Adeyemi’s house where we’d lived as tenants since we arrived Lagos about twenty-three years ago. It was not a sad moment when we moved; it wasn’t even bittersweet. We were moving to Ikoyi! Fast forward eight years and we’d moved house twice more, each move taking us further away from our very first neighbourhood. But when you’ve lived so long in a place you carry it with you, no matter how far away you move.

We get in the car on the 25th and the CD player whirs to life. It’s not quite old school music; more like mid-school: J-Lo singing her love don’t cost a thing; TLC being adamant about wanting no scrubs; Mary J Blige urging us to dance for her, Michael Jackson and Akon asking that their hands be held. These songs are the perfect soundtrack for this journey back in space and, in some ways, in time. My mother says the songs remind her about her first trip abroad, and I remember too: the things she brought back, how foreign they smelt, how very international; my teenage elation at touching something that had touched America. Even my mother had seemed brand new to me then. I remember the red and blue Virgin Atlantic blanket she’d somehow brought back. I cherished that blanket for years, despite relentless teasing from my sisters.

I can’t really follow the route or all the turns my mother takes on the drive, but when we reach Isolo and drive past Olufemi Peters Street I perk up. I look out the window at where St Monica ‘Montessori’ School used to stand and six years of my life pass before my eyes. We go past Apata Memorial, that school that had seemed so posh and dazzling and out of my reach as a child. Its walls are no longer white, now some peachy colour that renders the school less imposing.

We drive down Ago Palace Way, and to my right I see a Kingston Jo with its signature red and white. Kay-Jay Burger, we used to call it; there was one two streets away from our old house. It’s where the cool kids hung out, and my oldest sister was the coolest, at least in the eyes of Young Me. It’s where the boys would take the girls when they wanted to impress. I am surprised and inordinately glad to see Kay-Jay still in business.

We pass by Word Base Assembly, one of the churches we’d attended with my mother as kids when my dad was away working in the east and my mother was on a kind of spiritual odyssey. We visit my aunty who had been seriously sick for a year, twenty one days of which she’d spent in a coma. We marvel at the pictures of her 30-something-year-old self sickly in an 80-year-old’s body and praise God for the miracle that is her life today.

We get to the party. We greet, we hug, we smile, we eat and we play games. I like that even though the host family has moved to the Lekki area, like us, they come back to Okota for their Christmas parties. The tradition is comforting. The family now has a different house than the flat of old where they used to throw the parties years ago. This one is huge, it is beautiful, it is theirs. I think about the things that have changed and the things that have stayed the same. Okota, same with its perpetual coating of dust. Ago Palace Way, wider now than I remember it, and smooth with its fresh pavestones. I wonder about Pillar of Fire Bible Church, another stop on my mother’s spiritual odyssey. It used to be on a nearby street.

The memories go through my head. Church services at Word Base Assembly; visiting the home of my classmate, Fola, on holiday and feeling slightly better about ours; my sister stealing money from our dad because some ‘prophet’ had said something dire would happen if she didn’t get him money to pray and avert it; St Mary’s and my First Holy Communion, hundreds of Hail Marys and fake ‘confessions’ because even then as a child it didn’t make sense to me to tell Father Faceless the truly appalling things I’d done; night vigils at Pillar of Fire Bible Church; St Monica School and Uncle Daniel, Uncle James, Tunde and Onyedikachi, writing stories, getting caned, marching in front of the school gates to ‘The Brave Old Duke of York’ and other imported songs I didn’t understand; the school’s anthem, whose stolen tune I would only this year come to recognise from a hymn in church one fine Sunday morning; Kembos Private School and the many evening fellowships with fiery prayer said by gentle lamp light. Ire Akari Estate Road: the provisions store just by the market, where the mighty Prince Ebeano started; shopping for school supplies in Aswani Market on Tuesdays. Aina Street, me and my sisters calling out Bisi’s name from our window in her grandmother’s voice and laughing at her confusion as she looked around her every time. The Onwatus on Okeho Street.

Nostalgia is a sepia-toned feeling, and in the hazy harmattan air it’s hard to shake off.

We drive toward Third Mainland, home-bound, our mid-school music still playing our way. My mum says with a sigh, ‘Okota is still in my head.’

Theatre Events for the Holidays

It's a great season for theatre in Lagos, with two major musical productions coming up between December 29 and January 3. I will be watching and reviewing both, but not on Truth and Fiction. I recently started Curtain Call Naija, a blog just for theatre; so please follow it for all that good theatre stuff going forward. Also, please show us some Twitter love; we're @CurtainCallNaija.

So here are the coming musicals.

There's Wakaa, which is from BAP Productions, who brought us the highly acclaimed Saro (I and II). Wakaa tells the story of six young graduates as they struggle to find their feet. 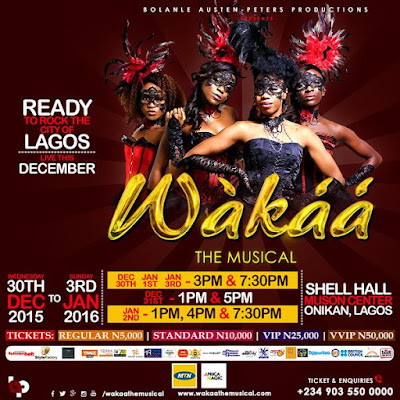 
Then there's Kakadu, produced by The Playhouse Initiative, which tells the story of Lagos in the sixties, with vibrant music and costumes. 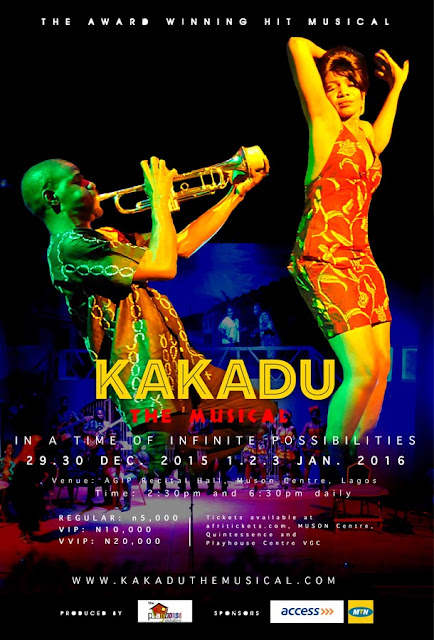 See why I'm loving the holidays?